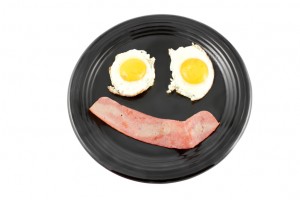 Thirty years ago this month the cover of Time Magazine showed a white paper plate with a sad face of two fried eggs and a downturn piece of bacon, entitled “Cholesterol – Now the Bad News.” After all of the subsequent diet mania and over-prescription of drugs that may have caused collateral muscle damage to joints and mental clarity, Cleveland Clinic’s Dr. Steven Nissen, who was recently interviewed on The Diane Rehm Show (NPR) said the “science was not there,” and scientists now have “egg on their faces.” Nissen’s view was later supported in the interview by Georgetown University Medical Center’s Dr. Thomas Sherman, who agreed that the dominant “voices” (scientists) had flawed science, and that other researchers with contradicting data were ignored. Sherman also recognized that saturated fats in foods can confuse the cholesterol discussion, and some patients with obesity, diabetes and certain genetic disorders respond well to reductions in their dietary cholesterol intake (and may or may not be taking a cholesterol-reduction statin drug).

Every five years, the Federal Government considers the advice from a panel of experts to update dietary guidelines for Americans, and the next update is expected to be released later this year. The panel recently recommended to the FDA reconsideration of the 2010 dietary guideline of limiting cholesterol from foods to no more than 300 milligrams daily – or an equivalent of two large eggs. The panel, hopefully supported by better science, now acknowledges cholesterol is ”not a nutrient of concern” because cholesterol from foods does not cause higher blood cholesterol levels.

What is certain is that the debate among the healthcare practitioners and nutritionists on dietary cholesterol will continue until the current data gaps are substantiated by competent and repeatable studies. Sherman estimates that this could take another five years. Perhaps Time Magazine could run a 30th Anniversary for the “cholesterol” cover where the bacon is no longer in the shape of a frown but in a half smile!

Our Ahh-mazing “AHA” Discovery Spotlight for this month (March) is Dr. Nissen and his colleagues, hosted by National Public Radio. They encourage better science and more responsible (less sensational) reporting of the dietary facts to consumers.