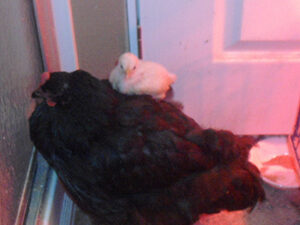 February 2020 blog – Back in 2020, Angela of South Carolina shared her mother hen’s miracle story. Her momma hen had been brutally attacked by a coyote. When Angela heard the “predator alert”, she went outside and one of the chicks ran past her followed by the momma hen that collapsed by Angela. She wrote … “There were so many bloody feathers at the scene with large pieces of skin attached to the feathers. I grabbed momma hen and brought her inside. She was in shock. She was motionless.”

Angela searched for the other chicks, retrieved them hiding in the weeds and brought them in with momma.

Angela continues about the momma hen when she brought the hen inside … “She was bleeding. I put her on towels and lifted her feathers to see a wound that could only be fatal. You could see everything inside the wound that was several inches in every direction. Her spine was exposed and much of the internal anatomy of her neck, upper back, etc.” For six consecutive days, Angela filled her open wound with the Polarized Water and left her alone to rest. The momma hen recovered and is outside sharing a safer environment with the other birds while scratching again in the soil. Her chicks also survived and were rehomed.

Angela’s full testimonial can be found here, 4th box on right and scrolled down the pdf to Angela’s testimonial.

A New Message from Angela

Angela sent this message today (2/24/22) with her reorder … “Hope all is well with yall! Rob, Dana & Watt-Ahh staff! Much Gratitude again, for the healing.. still sharing & sharing healing! I have created another Watt-Ahh addict…lol..Sick friend was healed overnight after trusting me & drinking Watt-Ahh. He got one of my cases but is so grateful for how he now feels! I for one, am beyond grateful for how Watt-Ahh has changed & enriched my life!! Know how much your labors are appreciated & how many lives have been saved … Me, folks I meet.. & so many injured/sick animals that benefit!….THANK YOU!”

Additional Testimonials about chicken health and vitality can be found at this link.