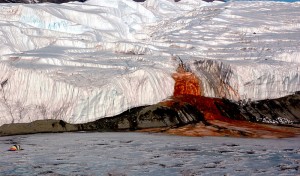 For the first time, scientists have discovered the mystery behind the Blood Falls in Antarctica’s Dry Valleys. In an extremely dry, cold and windy climate, life exists in the form of water twice as salty as seawater and rust-colored brine bacteria. Once considered an anomaly, the Blood Falls now appears to be a portal to a sub glacial network of waterways that connect the valley’s scattered lakes.

Equipped with a newly developed SkyTEM airborne electromagnetic sensor, Jill Mikucki, a microbiologist at the University of Tennessee, Knoxville, led an international research team to Blood Valley. The sensor is a large, six-sided transmitter suspended beneath a helicopter, and creates a magnetic field that picks up conductivity differences in the ground to a depth of about 1,000 feet. “Salty water shone like a beacon,” Mikucki said.

These new findings will help researchers understand the valley’s aquatic history.
The Dry Valleys are considered one of the closest analogs to Mars found on Earth.

We find the electromagnetic breakthrough of particular interest. Although not salt water but ultra-pure drinking water, the polarity of Watt-Ahh® also involves an innovative electromagnetic process to generate the gaseous form of water. When the Gas is bubbled into ultra-pure water, the resulting Watt-Ahh® has its own unique conductivity properties when compared to other types of structured water.

Our Ahh-mazing “AHA” Discovery Spotlight for this month (May) is SkyTEM’s electromagnetic sensor used in solving the mystery of the glacial Blood Falls.