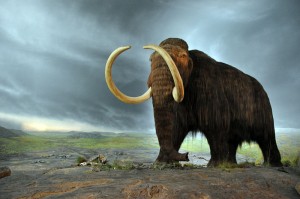 What would you do if you dug up an 11,000-year-old woolly mammoth fossil in your backyard? For Michigan farmer, James Bristle, and his wife, the solution was an easy one.

“Well, the wife said we’re not hanging it over the mantle,” he joked following the mammoth discovery on their soybean farm in Chelsea, MI. The Bristles have since donated the entire mammoth skeleton to the University of Michigan for future study and display. The find is among one of the significant in recorded Michigan history since there is evidence that humans buried the animal to come back for the meat, meaning humans lived in the area between 10,000 and 15,000 years ago.

Have you ever wondered why woolly mammoths no longer roam the Earth? It is unlikely that the ancient humans over hunted these animals or that a meteor caused their demise … humans would have suffered a setback too. We have a different theory on Global Climate Change that relates to lower energy changes on land such as less frequent thunderstorms or electron flow.

Whales today continue to reach a giant size, eating krill living in an ocean environment. The saltwater in the oceans is similar to an electrolyte solution, and the electromagnetic currents maintain strong electron flow. Consequently, krill may not have had to dramatically evolve through the centuries to survive like terrestrial plants. Krill has remained a bioavailable protein source for whales and other sea life.

With less frequent and widespread thunderstorms (an electron source), the land generally became more arid over time. Land plants evolved to survive in drier environments. Vascular systems that carry nutrients and water and protect the plants from dehydration are supported by a plastic-like substance called lignin. Woolly mammoths, dinosaurs, and even humans, do not have the enzymes to breakdown lignin to obtain optimum nourishment from the land plants.

We have found that plants grown hydroponically with our Polarized Water, which is rich in electrons, grow faster, more vibrant and do not seem to go into the “survivor” mode. In other words, the test results show less lignin with higher amounts of digestible nutrients (proteins, carbohydrates and fiber). 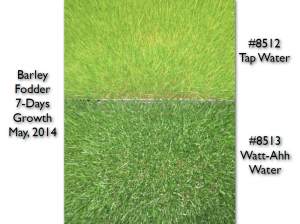 Our theory is that populations of larger terrestrial creatures like the woolly mammoth may have starved to death since nutrients in the land plants became less bioavailable over time. For us, processed food may block digestibility. The body feels starved and malnourished which may trigger the urge for someone to overeat beyond what their own body can assimilate – partly due to an energy imbalance in our food sources, which reduces digestibility. Growing plants with the use of electron-rich Polarized Water may have a role in offsetting obesity and malnutrition (for more information, visit wateriontechnologies.com and see the new WIT Machines having applications in food production).

We celebrate the discovery by the Bristles on their soybean farm. It is our Ahh-mazing “AHA” Discovery for October. The woolly mammoth fossil serves as evidence that the energy state of our own Earth is changing and we need to seek nature-based solutions for our own optimum health and survival.