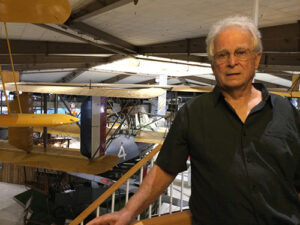 March 12, 2021, National Navy Aviation Museum, Pensacola, Fl. – Rob and I met with Museum Curator, Dina Linn, to show her photos of the Navy flying boats over 100 years ago. Rob and his cousins spent hours as children flipping through the pages of their grandfather’s photo album containing over 100 photos of the military flying boats, dirigibles and the Pensacola naval station over 100 years ago (circa 1918).

Rob also told Dina stories he had heard from his grandfather who was one of the Navy trainers of the flying boats. Rob’s grandfather, Richard Pass, who also was an inventor during his lifetime (railroad china, porcelain electrical insulators, aileron systems for planes) , held an early Aviation Pilot #.

Dina shared with us that the original flying boats were intended to spot submarines in bays during World War I. She also relayed to us that one of the early Naval Aviators had told his son that flying those aircraft was like flying a strawberry crate because they were so rickety. Rob recalled that his grandfather said the onboard repair kits consisted of banana glue, a roll of wire, pliers and New York Times newspaper because it was the thickest at the time.

Rob intends to get the photos and negatives professionally restored to museum quality as well as get a digitized copy made before donating to a museum archives. 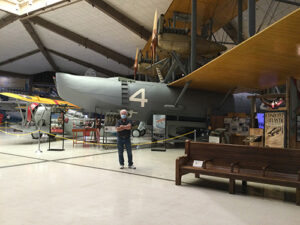 The original NC (Navy-Curtiss)-4 flying boat is on display at the museum beside high-tech aerodynamic jets including those used by the Blue Angels. Not only does the NC-4 have a mammoth size compared to the other planes, it also has the distinction of making the first successful transatlantic flight, 8 years before Lindbergh’s solo flight. It was a massive post-war effort in 1919 with dozens of Navy destroyers strategically placed in the Atlantic Ocean to allow refueling of the NC-4, sometimes only 30 minutes in the air before making another sea landing for the next refueling. After returning from Europe, the Navy sponsored a nationwide tour. The NC-4 drew crowds because of its large size for a plane at the time and its trans-Atlantic accomplishment. The humble crew was indeed surprised of being honored as brave aviation heroes by their fellow Americans.

More history on the Navy-Curtiss Flying Boats and Centennial Celebration of the First Transatlantic Flight:

Due to COVID-19, the museum is currently not open to the public except for those with U.S. Department of Defense certificates. Rob and I appreciated the opportunity to visit this great flight museum and especially appreciated the heroic stories of the individuals defending the freedoms of our Country.