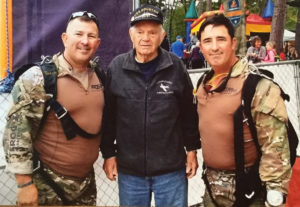 During World War II, Bob Wilson recalls his most memorable event of serving as part of the U.S. Navy Underwater Demolition Team (later the Navy SEALS). He was on the light cruiser, USS Houston CL-81, during the Battle of Formosa. Bob recalls while standing on the fore deck, an aerial torpedo hit the ship’s engine room below him, causing him to be launched into the Pacific Ocean. When he regained consciousness, he began to swim and burned his arms while pushing away floating fuel fires. He treaded in shark-infested waters for over a day before being rescued. Bob said the subsequent Japanese heavy air raids had the unintended consequences of wounding the circling sharks thereby allowing him to survive until he was rescued. 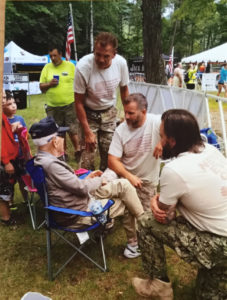 USS Houston CL-81. Last Veterans Day, Bob was one of two survivors who attended an event held in Boston, Massachusetts and both men were honored. The current Navy SEALS were fascinated to hear about Bob’s war stories.

After his military service, Bob wanted to teach but not in a disciplined public school. He wanted to teach his own way and decided upon a remote private school for boys in New Hampshire, called Proctor Academy. Perhaps Bob and the other post-war professors set the foundation of triggering the learning potential of young men who someday will make a place for themselves in this tough World. The prep school, which is now co-ed, has continued this legacy and is known for its strong one-on-one learning skills program.

One of Bob’s students was AquaNew’s Rob Gourley, who also had  his own differences in the “disciplinary method of classroom learning” at both public and military schools … kinda like the icon rebel celebrity, James Dean, over fifty years ago. Rob’s parents, who were are their wit’s end in finding a school who would understand their son, dropped him off at Proctor during his sophomore year in high school. Bob knew that Rob needed to be working on projects outside the classroom … helping him open up new ski trails using dynamite and chainsaws, repairing the on-site fire trucks, and making parts in the school’s machine shop. Bob believed in and cultivated Rob’s innate mechanical and problem-solving potentials such that he appointed Rob to become the youngest Fire Chief during his junior year.

How many have their former high school teacher come to visit them? Rob was thrilled that Bob accepted his invitation to come down from New Hampshire for a visit.

In November of 2018, Bob, his daughter, Patti, and his grandson enjoyed a few mild, sunny days in Florida. Rob took them out in the boat on Sarasota Bay. Bob told us that he was dreaming again about being out on the water. Bob also was amazed by his former student’s water gas discovery. Bob turned 95 this month.

Rob will always be appreciative of Bob’s intuition to unlock his students’ individual potentials that exceed the constraints of any text books as well as Bob’s bravery to survive against all odds to reach that potential … learning and teaching others after all, come from true life experiences.

Do you have a hero (or teacher) that triggered the positive potential in your own life? Do you have either an Ahh-mazing “AHA!” Discovery or a story to share?