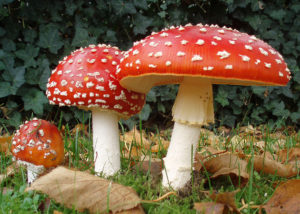 Let’s start with my botanist perspective … not all fungi (mushrooms) are bad but most have the potential of varying levels of myotoxins even the “edible ones” found in the wild. I learned this back in the mid-1970’s while taking a college-summer field class with Professor O.K. Miller, a leading researcher and author on identifying fungi. Professor O.K. disallowed us to eat any of the mushrooms during our collection hikes into Glacier National Park and the Banff Canadian Rocky Mountains, except for the giant puffballs (Calvatia gigantea) which are “safer” to eat … meaning less variability in potential toxins … (the recipe is to slice the puffball before spore stage, dip in an egg wash, and cook over a campfire). All of the other mushrooms had to return in our backpacks to the lab within the University of Montana’s Flathead Lake Biological Station, to make spore prints and confirm the species.

Not all fungi are bad (or toxic). Commercially-grown edible mushrooms are delicious but may lack in nutritional value. Also, Rob and I are currently adding powdered Chaga mushroom (Inonotus obliquus) to our morning elixir.  Yeast (Saccharomyces cerevisiae or microscopic single-cell fungi) are used in baked goods and beer.

Now for the Ugly

There are countless mold and microscopic fungi which the species can not be readily identified (no mushroom cap to pull off, place on white paper and use the resulting spore print for species classification).  Throughout our lives, we are exposed to many fungi species that can release myotoxins into both the body and brain.

The bacterium Borrelia burgdorferi is considered the cause of the symptoms (fatigue and headache) associated with Lyme Disease.

But wait for the ugliest … retrovirus can inject into our RNA and can replicate into our own DNA. According to Dietrich Klinghardt, MD, only 2% of our DNA is protein coding. Dr. Klinghardt further stated that another 6-8% of the DNA is retroviral DNA. Other doctors refer to the latter as “junk DNA” but it seems more like “zombie DNA” to me. Dr. Klinghardt stated that retroviruses may cause a variety of diseases including autism, auto immune and cancer.

Your home needs to be as mold-free as possible. Eating fruits and vegetables from plants that are naturally resistant to fungi such as grapes, are a good idea. We shared more of what we learned from a recent medical conference that included Dr. Klinghardt as a speaker.