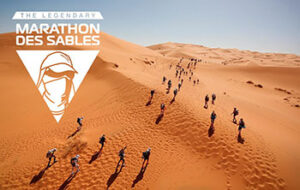 October 5, 2021 — What would you carry in your survival backpack for the Earth’s “Toughest Footrace”? … 156 miles of trekking across the blazing-hot Sahara Desert of southern Morocco over seven days. The first thing that comes to mind is water, so essential for life in the desert but heavy in the backpack. The maximum pack weight containing other requisite survival items, that is allowed by the race officials is 33 lbs., before the weight of any water in added to the pack.

Marathon des Sables is considered the “stuff of legends”. We wonder how much bottled water is “stuffed” into the backpack of each of these legendary true-grit athletes. We understand about 2 liter bottles (approximately 5 lbs. in weight) are handed out each morning at the beginning of each day’s race and additional water is also available at checkpoints approximately  6 miles apart. More water is provided at the camps where the athletes rest at night.  The marathon organizers say 120,000 liters are consumed by 1,200 runners plus support staff over the eleven days for this event.

These marathon athletes are active during peak daytime temperatures in the desert, up to 120 degrees F. The equivalent of two liters could be lost in only one hour of trekking on dunes of loose sand during that time. But with drinking regular water, the athlete is only absorbing about one liter per hour so it could become a dangerous hydration-deficit crisis.

What would we carry in our survival backpack? Not regular water. Our survival choice is Watt-Ahh bottled water. Watt-Ahh has the same weight in the backpack as regular water but the absorption efficiency is greater. For survival, someone can drink less Watt-Ahh for hydration compared to regular water since the former absorbs into the cells more rapidly … what we call “super hydration”. Less water to carry gives the marathon athlete a distinct competitive advantage (and also the ability to overcome extremely dry conditions).

The 2021 Marathon des Sables event ends this coming Monday. We can only imagine a thunderstorm in the desert, raining down Watt-Ahh to cool off these brave athletes crossing the sandy finish line.

Read more about Watt-Ahh being used in other extreme environments where athletes compete. Watt-Ahh should also be used in additional extreme “desert-like” environments including those exposed to pilots, submarine operators and other military dispatches.