Offshore boat racing recently lost one of our icons for the sport. JR Noble (58), President of STIHL Southeast and Driver for Team STIHL, passed away at his home in early March 2016. A Celebration of JR’s Life occurred in Orlando, FL, where race teams – including Team REDS/Watt-Ahh (Throttles Ed Tamberino, Dana and Rob Gourley) and STIHL (outdoor power equipment) dealers – gathered with JR’s family and friends.

JR, who was a great spokesman for the sport of offshore racing, autographed hundreds of STIHL baseball hats for admiring race fans and had a competitive racing spirit fully respected by the other race teams. We talked with his parents, Ardyce and Robert Sr., at the reception. They told us that their son loved sports fishing in remote areas of Alaska, and age was never a barrier for him even when he was a young teen in applying for odd jobs while being underage. What is amazing is that he developed his racing passion at age 50, and in eight short years, created a world-renowned racing team. This video with JR being interviewed brings back memories of the 2012 World Cup in Key West, FL, when Nature (high seas and currents) challenged each race team to their limits including our REDS/Watt-Ahh Team. 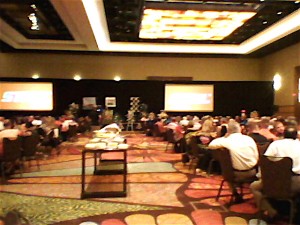 Before a crowd of hundreds, Robert Sr. toasted his son as his best friend. While Team STIHL stood behind him on the podium, Robert Sr. announced that Team STIHL will be racing this season in its new boat, and that his grandson, Jacob, will take over his father driver’s seat. The announcement received a standing ovation among many others throughout the celebration.

To Robert Sr., Adryce, Suzanne (JR’s wife), Jacob, Susan and Sherri (JR’s sisters), Mike Fosse and the rest of the STIHL Team: We express our condolences for your great loss. JR was a racing hero and it is a heartwarming and restorative announcement that the family has decided to continue his extreme racing legacy. ~Team REDS/Watt-Ahh