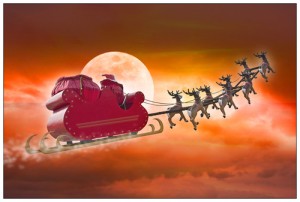 For those who thought Rudolph – with his nose so bright – drank more than his fair share of spiked egg nog, listen up. More likely, reindeer grazed on hallucinogenic mushrooms – Amanita muscaria – that grow on the Siberian tundra. Perhaps the inspiration for the legendary Rudolph may have come from a red mushroom on his nose.

Reindeer were not the only ones “flying.” Ethnomycologists (people who study the influence of fungi on human societies), including Harvard University Biologist, Donald Pfister, suggest Siberian tribesmen also ate the fungi and may have been hallucinating when they saw that reindeer were flying.

According to some Anthropologists, Santa is representative of Siberian Shamans who would ingest hallucinogenic “magic” mushrooms in order to commune with the spirit world, a journey often taken with an animal spirit as guide to these vision quests.

“As the story goes, up until a few hundred years ago these practicing shamans or priests connected to the older traditions would collect Amanita muscaria (the Holy Mushroom), dry them, and then give them as gifts on the winter solstice,” said John Rush, an Anthropologist and instructor at Sierra College in Rocklin, California. “Because snow is usually blocking doors, there was an opening in the roof through which people entered and exited, thus the chimney story.”

To further validate his theory, Rush goes on to point out the fact that people today bring pine trees into their home and lay out red and white packages under the tree – the exact place where you’d find Amanita muscaria growing in the wild. 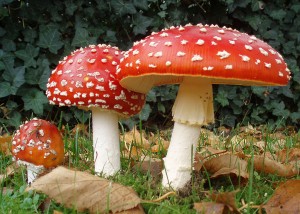 But not all historians agree. Ronald Hutton, a History professor at the University of Bristol, disputes the “Magic Mushroom” theory. “If you look at the evidence of Siberian shamanism, which I’ve done,” Hutton said, “you find that shamans didn’t travel by sleigh, didn’t usually deal with reindeer spirits, very rarely took the mushrooms to get trances, didn’t have red-and-white clothes.”

We’ll let you decide for yourself if we’ve stumbled upon a true Ahh-mazing AHA! Discovery for December: The Truth Behind Santa’s Flying Reindeer. It makes us curious, however, about the origin of “Visions of Sugar Plums Dancing in their Heads” which may be next year’s AHA!

Though, we must add the disclaimer that AquaNew does not advocate the ingesting of hallucinogenic shrooms of any kind! Please choose the holiday cookies instead.

NOTE: The attractive Amanita muscaria, shown in the above photo, has a bright red cap with white flecks that are colors iconic of Christmas.