…The “inspired teacher” behind the 888 number

The Spotlight this week is an interview with Danielle Hier-Palli, owner of Birdland Media Works, by Watt-Ahh® Inventor, Rob Gourley. Danielle has worked as AquaNew’s publicist for almost one year. Her warm and kind voice answers the 888 number used to assist our Watt-Ahh® customers.

Q: Where did your company name “Birdland” come from?

A: When I lived and taught yoga up North (PA, NY and NJ), people used to jokingly call me the “bird whisperer” because I always found hurt birds and would rush them to the nearest animal rescue. Colleagues would also periodically invite me to their home and ask me to “talk” to their birds to find out what was wrong when their pet was misbehaving.

In addition to having taught yoga part time for nearly 13 years (along with Pilates and meditation), I am also a full-time freelance writer. When I moved to Florida, I was struck by the amazing variety of colorful birds here and noticed that so many yoga poses mimic birds and other animals. “Birdland” is where I feel I now live. 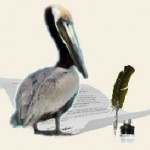 I chose the Pelican as my company’s mascot because it is “beautifully awkward.” Its beak is too big for his head and his head seems too small for his body. I believe it is these same seeming imperfections that also give people depth and character. For students taking yoga for the first time, they often feel like the pelican. When I interview people for publications, they typically don’t think they are anything special and are often surprised at how interesting they really are when they read their own story in print.

Interestingly enough, I visited the Chino village in the Amazon rainforest in 2008, and the Shaman (Pasquita) told me my totem animal was “Huanchaquita” the masked crimson tanager. Pasquita said that Huanchaquita is an “independent bird who flies around singing happily all the time” … That was about right!

Q: You, like me, love animals. I understand you give Watt-Ahh® to all your pets. Is that correct? 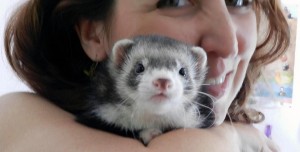 A: Yes, my husband and I have three cats and one ferret (Fondue). They all have Watt-Ahh® included in their drinking water. When we took Fondue to the vet for his first check up, she told us that we can expect him to have some form of cancer by age four, as nearly two-thirds of all ferrets develop the disease in their lifetime. My informal “study” is to see how he fares with a diet that includes Watt-Ahh®, particularly since ferrets are also prone to dehydration. Fondue turns one year old on Feb. 26! 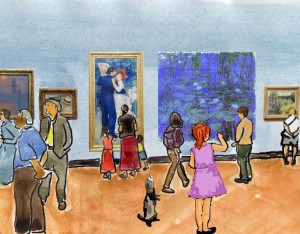 A: He certainly thinks he’s a celebrity! I published the first Acting Out Yoga book, Harvir in the Amazon, as a learning tool for kids practicing yoga. The illustrations are by artist Jessica Clark. The second book, Anna in Paris, involves young Anna (named after my friend’s daughter, who currently lives in Fontainebleau, France) chasing her mischievous ferret, Fondue, all over Paris. Kids act out the story using yoga poses and learn a little about the art and culture of France in the process. The illustrations are by artist Joan Peters. Anna in Paris is due for publication in August of 2013. 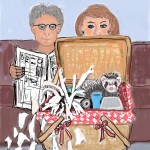 To learn more about Watt-Ahh®, phone 888-936-AQUA (2782) or visit our FAQ page. For more information about Birdland Media Works, visit www.BirdlandMediaWorks.com. To find out more about the Acting Out Yoga series, visit www.ActingOutYoga.com.

FUN FACT: Watt-Ahh® is not the only hyphenated name people sometimes have trouble figuring out how to pronounce. Danielle’s legal name is Danielle Hope Hier-Palli. “Hier” pronounced “Higher” and “Palli” pronounced like “Pie-yee”.