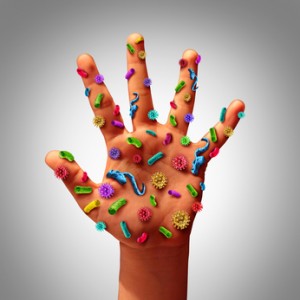 A major chlorine-bleach manufacturer wants you to believe that a surface is only clean if bleach is used. This bold statement appears in aggressive advertising campaigns. This is the link to one of their commercials currently airing on TV … Really?

We do recognize sanitation safeguards against the spread of diseases are important for our wellbeing; however, there must be better nature-based technologies available. Chlorine-based bleach raises both environmental and health safety concerns. The anti-bacterial* or disinfecting wipes used to clean surfaces (produced by the same bleach manufacturer and others) contain formulations involving combinations of chlorides, ammonia, citric acid and/or benzyl-based chemicals. They come with warning labels about possible eye irritation, and recommend hand washing after each use, storage away from children, no disposal by flushing down the toilet, and no contamination with food and water. We think the New York State Department of Health has a compelling statement on chlorine, one of the key active ingredients for many of the cleansing formulations:

“The health effects of chlorine are primarily due to its corrosive properties. The strong oxidizing effects of chlorine cause hydrogen to split from water in moist tissue, resulting in the release of nascent oxygen and hydrogen chloride which produce corrosive tissue damage. The oxidation of chlorine may also form hypochlorous acid, which will penetrate cells and react with cytoplasmic proteins to destroy cell structure.”

Do we really want to place our tushes on toilet seats recently cleansed with chlorine beach?

Personal hand wipes and gels are typically alcohol (ethanol) based and may not be as effective in sanitation. Unfortunately, alcohol also penetrates and damages skin cells. Non-alcohol baby wipes are available with “synthetic cleansing agents” which may provide minimal sanitation at best, and likely will leave a residue on the surface of the skin. It appears that the safest alternative for cleaning babies is to use a mixture of pure water and a very mild soap and use a clean soft towel.

There are other means of sanitation including desiccation (extreme drying), heat, and the infusion of certain herbs – including eucalyptus, vinegar and UV radiation (maybe good for your toothbrush but more problematic in sanitizing your entire bathroom). However, the most natural, safe and effective sanitizer in our opinion is stabilized hydrogen peroxide (H2O2) at a very low concentration (less than 3%) in a water solution similar to what our own bodies produce to support healing.** Hydrogen peroxide solution is also preferred by hospitals and healthcare experts, but the major challenge that has involved millions of dollars in research is how to stabilize and prevent immediate decomposition of hydrogen peroxide into water and oxygen (loss of sterilization activity). Many of the formulations involve addition of surfactants and other chemicals used for stabilization which also leave a residue on the surface of the skin.

The Division of Agriculture/Cooperative Extension Service of the University of Arkansas performed research on stabilized commercial hydrogen peroxide products used in treating drinking water supplies and compared with 35% (by weight) concentration of hydrogen peroxide in solution coming out of a container. The products, when diluted with regular water, only retained an efficacy for sterilization in less than 48 hours before the hydrogen peroxide decomposed to a low level of residual activity.

Research recently performed by two medical supply laboratories and two universities have confirmed AquaNew CEO Rob Gourley’s premise that the dioxytetrahydride structure of the Polarized Water stabilizes very low concentrations of hydrogen peroxide (less than 3% by weight) without any chemical additives, and the antibiotic efficacy is maintained for years. It is our Ahh-mazing AHA! Discovery for June 2015 on a breakthrough for a “nature-based sanitizer,” and we will continue this story in upcoming blogs.

* As a point of clarification, the terms “antibacterial”, “antiseptic”, “antimicrobial” and “antibiotic” all seem to be generally interchangeable, being substances used against and prevention of the spread of bacteria (or virus with its own terminology including “virucide”). The term of “antibiotic” appears to be used more in the field of medicine while “antibacterial” is used more in the commercialization of soaps and cleaners. For our purposes, we use the terms interchangeably.

** Similar to other chemicals such as alcohol, we do need to caution that hydrogen peroxide was historically used in disinfecting topical wounds until researchers proved that it destroyed skin cells, slowed healing and led to scarring. Only very low concentrations of hydrogen peroxide in water solution should be applied topically to wounds for the optimum healing.