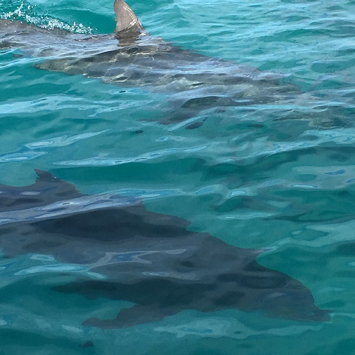 Sometimes the best AHA! Discoveries occur while on vacation. Our minds are open to new experiences.

Our family recently enjoyed a beautiful morning together with Captain Victoria Impallomeni on her Dancing Dolphin Spirits Charter Boat going out of Key West, FL. The sea was calm, a time when the blue color of the water softly transitions into the sky making the darker mangrove islands in the distance look like they were floating on the horizon. It was a perfect morning while Captain Victoria played yoga-like drum music. We discovered a pod of eight bottlenose dolphins snoozing, and we followed in the boat while they continued their infinity dreaming. After some minutes of watching this sleepy pod, one of the dolphins slapped his tail creating a splash at the water surface. Captain Victoria told us it is likely a signal to the other dolphins to move in his direction. We shortly departed from the sleepy pod since tail slapping can also mean for us to go away.

Ever wondered how sea mammals come up to the surface to breathe while sleeping? It is more similar to napping actually, and may or may not involve dreaming (Rapid Eye Movement or REM episodes) according to a Scientific American article.

Captain Victoria shared her 30 years of knowledge in watching dolphins, and told us that wild dolphins will swim in an infinity pattern while napping. This makes sense since wild dolphins, with unrestricted travel in a bay, can make a large circle together and after a couple of hours, reverse the sides of their brains and even the direction to complete the opposite circle of an infinity.

Thank you, Captain Victoria, for opening our minds to the Ahh-mazing sea creatures and teaching others the need to respect their habitat.

My sister, Lisa S., shared the photo of two dolphins above as well as this video of a dolphin visiting our brother, Keith P., while he was sitting on the stern of the boat. The dolphin became energized, and not necessarily from the Polarized Water that my husband, Rob Gourley, splashed into the water. Instead, the dolphin spotted a fish to chase!