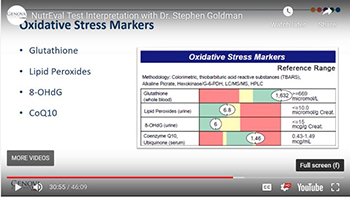 A customer recently shared with us that Genova Diagnostics performs nutritional testing on blood and urine samples that evaluate the equilibrium between oxidative stress and antioxidant reserve. Free radicals result from normal activity energy production, detoxification of pollutants and immunologic defense mechanisms. If the body has an insufficient antioxidant reserve and enzymes, “unchecked” free radical production will extract electrons from neighboring molecules. “Unchecked” free radicals can result in oxidative stress-related damage to  both cellular mitochondria and DNA that will accelerate human disease and aging.

We have a theory that the structure of the Polarized Water with an electron reserve on the outer ring of the four hydrogen (with the two oxygen co-valently bonded) is somewhat like that of an antioxidant. The same customer that told us about the nutritional testing also gave us the following testimonial entitled “No Measurable Oxidative Stress” that has strengthened our theory:

I’ve been drinking the Polarized Water for over 6 months, perhaps as much as a year. Sterling Hill recommended it, so I drove to Sarasota, tried some and have kept purchasing it.

My functional medicine doctor has me take either the NutrEval or the ONE test by Genova Lab’s to determine levels of oxidative stress. I started doing so in 2010 and have always had levels of 11 or higher, up to the low to mid 20s. My level was lowest when drinking another redox supplement. In early May, I did another ONE test, the first I’d done since drinking the Polarized Water daily. I had no detectable levels of oxidative stress for the first time ever!

My doctor says oxidative stress is the main reading he looks for on these tests, more so than for vitamin or mineral deficiencies. His nurse was so impressed by my results that she purchased two cases of one liter bottles from me and is going to test herself after consuming them.

I started by drinking one liter a day. Currently, as of the time I tested in May, I have been consuming only half a liter a day.

Please let me know if you want me to share copies of my test results with no (full) name”. Kathy of Florida

More on the Diagnostic Nutritional Testing