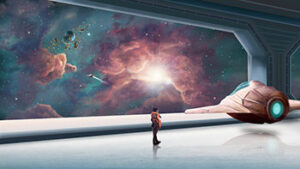 Parasitic Mitochondria Survive Climate Change Plus Ghost Gases … it sounds like a great action-packed video game. Not so. This title describes the life-force evolution of our own cellular mitochondria … that control metabolism, immunity, and neurological health. All living creatures (both animals and plants) rely on mitochondria for the essentials of life except bacteria itself that lack any mitochondria. But wait, it is common scientific theory that bacteria surviving climate change went into a symbiotic relationship with other bacteria to originally form the mitochondria … like a protective space ship. Then the parasitic mitochondria invaded cells to become the powerhouse of all cells. This is a prime example that real life can compete with the imaginary creativity of video games.

O.k., enough about the video game analogy … but that was a fun comparison!

What Powers the Powerhouses?

Bacteria can produce electricity by generating (or stripping) electrons in their cells. They thrive on oxidation of organic compounds including carbohydrates (glucose) and protein. Biologic oxidation by mitochondria results in synthesis of ATP as the chemical energy source for both life and healing. Our theory is that Watt-Ahh is like the original water on Earth enriched with electrons that support these critical bioenergetic processes.