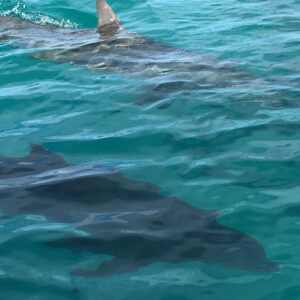 September 24, 2022 — Ever wondered how sea mammals such as dolphins and whales sleep underwater without coming to the surface to breathe? Some of the answers can be found in this fascinating Scientific American article.

While on a Key West boat excursion several years ago, we observed a pod of eight snoozing bottlenose dolphins. Captain Victoria Impallomeni told us about dolphin “infinity sleeping” (or swimming in a figure-8 formation).

Captain Victoria explained to us that napping wild dolphins, with unrestricted travel in a bay, can make a large circle together and after a couple of hours, reverse the sides of their brains and even the direction to complete the opposite circle of an infinity.

After some minutes of watching this sleepy pod, one of the dolphins slapped his tail creating a splash at the water surface. Captain Victoria told us it is likely a signal to the other dolphins to move in his direction. We shortly departed from the sleepy pod since tail slapping can also mean for us to go away.