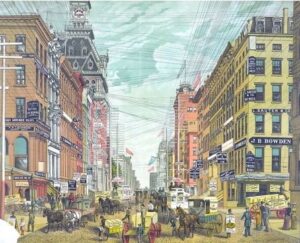 September 24, 2022 — The “Watts” name has over a 130-year history in Rob Gourley’s family … all the way back to Edison and Tesla’s time when there were safety concerns over criss-crossing wires connecting homes and apartment buildings to electrical power. Rob talks in his documentary video (Minute 23:39 in the video banner link below) about the revelation of the brand name Watt-Ahh. During a focus group session over 15 years ago, Rob says in the video we jumped onto that name. Watt-Ahh represents to Rob the special combination of watts and amps that he discovered to make the fifth state of water (an electrically-charged water gas) … and his family’s “Watts” history.

The start of the “Watts” history began when the Superintendent of Syracuse (NY) Light and Power Company, Albert Seymour, was concerned about the frequency of electrical shocks and fires terrorizing the customers. Albert collaborated with James Pass, Rob’s great grandfather and master potter, on inventing and manufacturing porcelain insulators. They became the founders of Pass & Seymour that to this day, is one of worldwide industry leaders in the manufacturer electrical outlets, switches, electrical circuit breakers, tubes, knobs, light and electrical sockets, cleats and a host of other necessary electrical products that made electrical power service into homes safer (and even recharge both our smart devices and electric cars to this day).

Rob did not meet his great grandfather since James passed in 1913 from a condition called “Potter’s Lung”. Rob’s great grandmother, Adelaide Pass, donated 13.8 acres to the City of Syracuse in her husband’s memory named The James Pass Arboretum which is open to the public. Rob did know his grandfather, Richard Pass, James and Adelaide’s son, who carried on his father’s inventive legacy.

When reading this article about James, I had to pause to think about this one sentence since it reminded me about Rob’s own diligence … “He was dedicated to a fastidious regiment of testing and tinkering to get the absolute best product he could.” LOL! I suppose for James’ great grandson, Rob … the spark does not fall far from the electrical “circuitree”.

Photo credit: The photo above is a postcard from this article.