As science geeks, we are always searching to understand why SG Gas,  the high energy gaseous form of water that is produced by our electromagnetic process and then infused into the pure water to make the Polarized Water, does not freeze at normal temperatures. The ice cube tray photo to the left shows the spicules formed while liquid water is freezing, and the Gas is being released from the surface of the ice cube. We have yet to figure out what is the freezing temperature of the Gas itself. 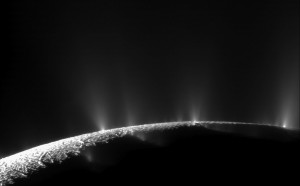 It appears we have something in common with several space agencies – NASA, European and Italian – as part of the Cassini-Huygens Saturn Mission. These agencies also are trying to figure out how geyser-like jets containing water gas, ice particles and minerals spew from the frozen surface of one of Saturn’s moons, Enceladus. It is estimated that the surface temperature of Enceladus is 330o F. well below the normal freezing temperature for liquid water. NASA’s website states:

It was data from the magnetometer aboard the Cassini spacecraft that prompted scientists to take a closer look at Enceladus with a targeted flyby. Something—perhaps an atmosphere—was pushing against Saturn’s magnetic field near Enceladus. This meant gases may have been originating from the moon’s surface or interior.

Cassini revealed the dramatic truth: jets of icy particles from that ocean, laced with a brew of water and simple organic chemicals, gush out into space. The material shoots out at about 800 miles per hour (400 meters per second) and forms a plume that extends hundreds of miles into space. Some of the material falls back onto Enceladus, and some escapes to form Saturn’s vast E ring.

Space agencies continue to analyze Cassini’s last targeted flyover of Enceladus back in October 2015. The collected data may lead to another future mission to confirm whether Enceladus supports a habitable environment which will make it one of the top planetary discoveries of all time.