August 25, 2022 — Using fossil fuels such as natural gas are the “dinosaur way” to make hydrogen that is currently used in stationary power devices (fuel cells). Hydrogen fuel cells generate power using a chemical reaction rather than combustion, with the byproducts of water and thermal heat. For the latter, we have recommendations in the last section below of reducing thermal heat generated from the chemical reaction of hydrogen.

Some buses, trucks and cars have portable fuel cells and the fuel mixture is typically 90% natural gas and 10% diesel. Nationwide, there are a few hydrogen stations with high-pressure storage tanks but the problem is hydrogen gas alone produces a low horsepower to run vehicles (until now and see the last section below). Hydrogen has a better energy utilization either in converting to electricity or burned to heat food. Auto manufacturers, however, are watching for improvements in the efficiencies of hydrogen fuel cells that would give an alternative to electric cars with their lithium-ion batteries needing to be frequently recharged.

Worldwide, major investment in hydrogen is occurring. For instance, the European Union formed a clean hydrogen alliance with future plans to use the existing natural gas pipeline network to distribute hydrogen across the continent. Closer to home, recently passed U.S. Inflation Reduction Act of 2022 will make a large investment in renewable energy with a goal of 40% carbon dioxide emission reduction by 2030. Further, the proposed policies of the California Air Resources Board will make California the first U.S. State to begin a ban on the sale of vehicles with combustion engines. By 2026, 35% of the vehicles sold must have “zero emissions” and by 2035, 100% of sold vehicles. Other States may follow California in this ban.

However, just like the manufacture of lithium-ion batteries and electricity generation needed to recharge batteries in electric cars, the traditional processes to produce hydrogen itself is neither renewable nor green with “zero emissions” … but wait, we have a “Super Green Hydrogen” alternative using DiTetra Gas. This new type of hydrogen production uses lower energy, produces electron-rich hydrogen for improved efficiencies in electrical conversion plus reduces thermal heat in the production of hydrogen. What are the Types of Hydrogen?

The schematic below was adapted from this link on the three main types of hydrogen. We added a new fourth one using DiTetra Gas to create a “Super Green Hydrogen”.

Gray Hydrogen (top row, left): The traditional way to produce hydrogen is from fossil fuels such as natural gas. High temperature steam is used and carbon dioxide is emitted from the smokestack as well as heat. 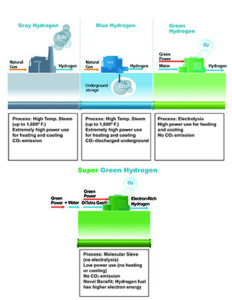 WIT International is open to any discussions with energy production companies interested in this new type of hydrogen (or the restructured fuel described in the next section). Contact Rob Gourley at 1-888-936-2728 ET.

In a previous blog, we discussed the environmental impact of thermal heat generated mainly from vehicle combustion engines while idling during highway gridlocks. Rob Gourley is continuing his research on the infusion of DiTetra Gas into various fuels that when combustion occurs inside an engine, the generated steam absorbs the thermal heat. The restructured fuel also adds greater horsepower to the engine.