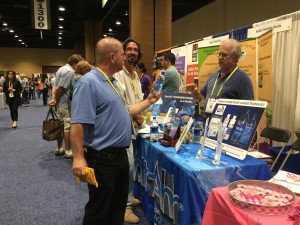 The SOHO Expo was well attended by independent retail buyers, manufacturers and marketers. We enjoyed meeting several of the existing retailers who carry Watt-Ahh® in their respective stores, including Peggy of Peggy’s Natural Foods, Greg of Bulk-N-Natural Foods, and a buyer for Super Value Nutrition – Landings.

Dr. Stephen Lamm, M.D., author of No Guts, No Glory, was one of the keynote speakers during the Expo. Ryan Sensenbrenner of Enzymedica made sure Dr. Stephen had a bottle of Watt-Ahh® to drink during his book signing. Dr. Lamm told us during his presentation that the gut has complicities that are susceptible to malfunction. It is a chronic major challenge such that at least one out of five persons experience severe gastrointestinal symptoms at any given time. He also stated that even over-the-counter “gastro” aids that are commonly used (and advertised on TV) can cause unintended disease consequences, including but not limited to, diabetes. Dr. Lamm stated that doctors are in the “illness” business and that we as individuals need to be into “wellness,” taking responsibility for our own healthier diets and exercise … And, of course, we vote for good hydration.