Marmon Power Productions (Ellen Greenleaf) is producing a series on the engineering and development of water racing. Tom MacKnight is videographer and editor. Tom skillfully interviewed Rob Gourley of REDS Offshore Racing and AquaNew to find out how to transfer engine power to the water. Rob admits he is “old school” but during the interview, he told a story about another owner of a highly competitive race boat. The guy told Rob that when their boat broke, they have to order parts and hope for the best. He accused Rob of having an distinctive advantage of knowing how to make the part and knowing it will perform.

AquaNew’s fulfillment center is the setting for the video with Rob’s backdrop being pallets of Watt-Ahh bottled water. The conversation went from power on the water to how Rob adds power to the water. Rob recited his journey in discovering DiTetra Gas, the Fifth State of Water.

Ellen’s DNA comes from auto racing with her great grandfather and great uncle being founders of “old school” racing, winning the first Indianapolis 500 race in the Marmon Wasp in 1911. Ellen told us that her relatives also had to the ability to figure out how things worked and then reinvented ways to make it better such as adding rear view mirrors to their Marmon cars to improve the driver’s visibility.

Rob’s interview turns to his own experiences in auto racing. Tom asks him about using DiTetra Gas to add power to fuel. Rob talks about phenomenal dyno results with the treated fuel and how the race drivers will need to adapt to driving cars with immediate power performance. Rob was told by a long-time dyno operator in NASCAR Country (Charlotte, NC) who looked at the low emissions that Rob may have “saved” the future of the combustion engine.

The photo below shows Rob (left), Ellen (center) and Rob’s wife, Dana Gourley (right) behind the video production scene on November 18, 2020. Tom told Rob before the video that he may be a “legend waiting to happen” … the video may convince others too! We will let you know when and how this racing series is released. Tom and Ellen are in the process of interviewing other racing legends including boat manufacturers, racers and race team owners. 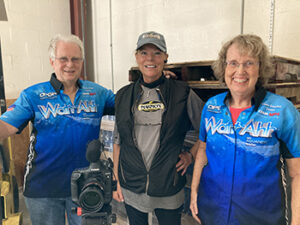