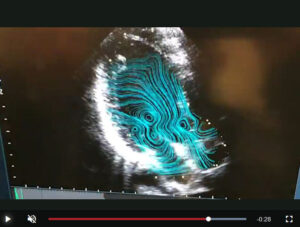 December 17, 2021 – Blood platelets and plasma swirl into the left atrium of the heart before entering the left ventricle. The resulting whirlpools or vortices spin in the opposite direction of the blood flow such that the electron energy restructures the blood. It may be too simplistic to think of the heart as being only a pump1.

Another purpose of the vortices is to create a more efficient flow of blood through heart valves. One household example of a water vortex is in a toilet bowl that improves the flushing performance of a toilet.

With great interest, I wanted to view for myself a video image of the vortices inside of the heart. During my cyber search, I discovered a new cardiac ultrasound technology introduced earlier this year. I am sharing the video here. The photo above is a screenshot captured from the video of several blood vortices located in the left atrium near the valve connecting to the left ventricle below.

Nature Does Not Waste Electrons

Nature does not waste the flow of energy electrons. Water including that in our blood plasma holds a charge. It explains how spinning water to reactivate electrons can do amazing motion and circulation feats … like traveling upwards into the leaves of tall canopy trees and even enabling salmon to jump high waterfalls.

Almost a century ago before any ultrasound technology, Viktor Schauberger, an author who wrote about the Secrets of Natural Energy, studied the trout’s ability to jump up high waterfalls with little apparent effort (the same is true of salmon). After observing a large trout confronting a waterfall during spawning time on a moonlit early spring night, Schauberger wrote that a large fish:

“…danced in great twisting movements in the undulating water, as it swam quickly to and fro. Then, as suddenly, the large trout disappeared in the jet of the waterfall which glistened like falling metal. I saw it fleetingly under a conically-shaped stream of water, dancing in a wild spinning movement … It then came out of this spinning movement and floated motionlessly upwards … reaching the upper curve of the waterfall. There, in the fast-flowing water, with a vigorous tail movement, it disappeared.” (excerpt from the book, entitled Living Water, by Olof Alexandersson2).

Schauberger used this phenomenon as evidence to his theory that trout use some unknown source of energy within the water. The rushing water creates a whirlpool or vortex in the opposite direction of the water flow, and the trout seeks out this energy flow and uses nature’s whirlpool of energy to jump the waterfall.

The high energy form of water is indeed one of the great Secrets of Nature. Part of the process in creating the electron-rich, stable structure of AquaNew’s Watt-Ahh involves a vortex similar to that of Nature. Authors and Structured Water Researchers MJ Pangman and Melanie Evans of Dancing with Water wrote chapters on the vortex or ormus high-spin state of Watt-Ahh that they experience themselves.

Back to the heart, Author and Chiropractor Stephen Hussey states … “A heart attack is caused by irregular current flow through our system, It’s all about electricity and the nerves are electrical and the key to it all is the master conductor called water.”1 The stable, high energy molecular structure of Watt-Ahh is truly a master conductor for the blood, nerves and cells needed to sustain the healthy performance of our bodies.