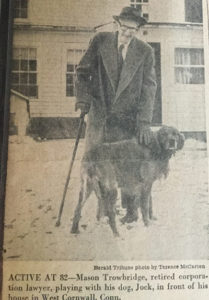 January of 2021: Back in 2018, I wrote about the recent Trowbridge Family Reunion held at Yelping Hill in Connecticut. My husband Rob is a grandson of Mason Trowbridge. In this article, I highlighted the Trowbridge cottage that was originally designed by world-renown architect Ruth Maxon Adams. Rob’s cousin, Ann Trowbridge along with her husband, Dave, are also architects and they restored the cottage (see photo below). During the COVID-19 pandemic, the architectural creativity of Yelping Hill continued with Ann working from the cottage on the current restoration project at the Smithsonian Institute in Washington DC.

During the family reunion,  I asked several grandchildren including Rob and Ann, about their favorite memory of their grandfather, Mason Trowbridge. It was unanimous that it was Jock, his faithful red golden retriever dog. In 1959, this photo with an article about Mason were published in the New York Herald Tribune.

This is the grandchildren’s favorite story: Jock had an account at the Bierce’s General Merchandise Store in West Cornwall, CT., near the famous covered bridge crossing the Housatonic River. Each morning, Jock would go to the store to pick up several dog biscuits out of the barrel bin and then go up to the cash register to show how many biscuits. The store owner would write it down on the ledger and attach the morning newspaper in the dog’s collar for Jock to deliver back to Mason at home. One day, as the story goes, Jock was patiently waiting in line at the cash register, and a woman visiting from New York City, complained about Jock taking up space in the line. The owner said… “Madame, the dog is a customer and for that matter, a paying customer!” Jock also delivered checks to the store owner to pay on his running account.

Mason’s grand kids also got into the action. They would get either candy bars or ice cream and charge to Jock’s account!

Mason’s family was impoverish and he had to drop out of school. Fortunately, he had an uncle who became a successful gold-prospector (another granddaughter recalls it was silver). He decided to pay for Mason’s tuition to continue the family tradition of Trowbridge males attending Yale. Mason was told by his uncle to get himself to Yale and study with a professor before taking entry exams. Mason took the exams and knew he failed the math portion. After the exams, he saw his professor walking towards him on the sidewalk. Being embarrassed, Mason crossed the street to avoid him. The professor also crossed the street to talk with Mason. Mason admitted that he failed the math exam. The professor agreed and said to him … “Mason, your thesis indeed disguised your knowledge in math”. The professor subsequently told Mason that Yale would accept him contingent upon him working harder on learning math.

Mason graduated and became a long-term general counsel for Colgate-Palmolive. 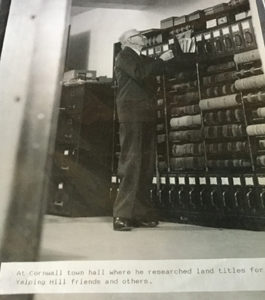 As the grandchildren’s story goes as well as collaborated by the Cornwall Historical Society, Mason and his wife, Helen Fox Trowbridge, and some academic and creative friends including Henry Seidel Canby (editor of the Saturday Review), Lee Wilson Dodd, Beverly Kunkel, Henry Noble MacCracken (President of Vassar College), and David Smith, wanted to get out of New York City during the hot summer and find a retreat in Maine. They headed out across rough, unpaved roads and one of the vehicles broke down in the foothills of northwestern Connecticut (the Berkshires or Litchfield Hills).  Their wives convinced their husbands that was as far as they want to travel. In 1921, the group purchased a tract of land in Cornwall known as Yelping Hill, to become their summer retreat community.

As a former professional land use planner, I appreciate Mason’s efforts of searching land titles and preparing covenants that are still relevant to this day as a special community association of single-family homes having their own private views of the valleys and common community areas and utilities (a pump station for water distribution). Well-known female architect, Ruth Maxon Adams designed both her summer home and others including the “Gingerbread House” owned by Mason and Helen (shown below with Mason’s granddaughter, Ann, and her husband, Dave). Ruth was partial to the medieval English and Tudor (or neoclassical) styles. 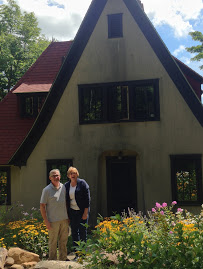 Ruth designed the original Yelping Hill houses without kitchens since there was communal dining at the “barn”. The barn has a well-equipped large kitchen, long tables on the porches and guest rooms on the second floor. Childcare was also “communal” as described by Wiki. Her architectural peers consider Ruth’s design concepts as “expressions of feminist ideology”. Note: From Rob’s childhood memories, he agrees with the feminist ideology in function but he is not sure that  “communal” is the right description. The women had summer help for both the cooking and child care so they can enjoy the happy hour. He also does not recall his grandmother ever cooking. 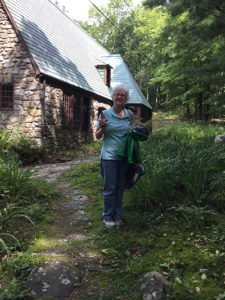 Another Mason granddaughter, Liz, standing in front of the summer home owned by Henry Noble MacCracken (President of Vassar College)

With each family visit to Yelping Hill, Rob has fond childhood memories of being outdoors and exploring nature with these learned individuals including “Kunkel” the Bug Man (an entomologist professor) and his Uncle Jim Trowbridge (a soap bubble expert for Colgate-Palmolive).

I found this excerpt from the Cornwall Connecticut Historical Society  … “When the Yelpers were in residence, every Saturday night a community event was held at the Yelping Hill Association barn. Some events were purely social, but others gave community members a chance to share what they had been creating during the week. The children, Whelpers, also put on events – such as the play by Trowbridge, Trowbridge, Trowbridge, Trowbridge, Trowbridge, and Trowbridge”. One of these referenced “Trowbridges” is Cornelia or nickname “Neeler”  who was Rob’s mother and one of Mason and Helen’s daughters. 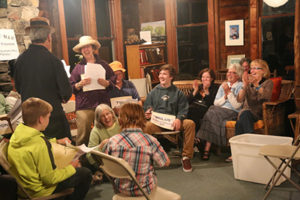 I really had to laugh when I read the excerpt above since I recall the 2014 family reunion that there was a spontaneously-selected cast who read out load one of the play scripts written by Neeler. The actors in the photo to the left is Hilly (wearing a straw hat) and his wife, Helen (a granddaughter), a neighbor, Yelper Deb Cake who is sitting on the floor, Rob is sitting and looking down at the script, and sitting to his left is Jeremy (a great grandson), and granddaughters Jane, Liz and Rebecca. This year’s reunion was no exception in continuing the Yelping Hill tradition in Saturday night entertainment with a happy hour, a communal-catered dinner, a talent show, new book presentations by two published authors, and teams answering family trivia questions. The team that I was assigned had only two other in-laws and we could not compete with my sister-in-law’s (Rebecca) team who knew all of the correct answers. 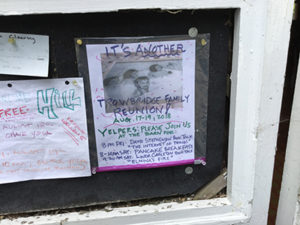 Another funny story is when Rob and I rode up to the barn for this first time this year. We thought we were arriving promptly on time (6 p.m. Friday) for the start of the 2018 reunion. However, no one had their car parked outside the barn. We thought we neither had the right date nor time until I saw the flyer posted outside the front door shown below. I told Rob who was waiting in the car, that we have arrived at the correct time because there is a posted flyer with the time including the photo of him as a young boy, nude in a bubble bath with his three kid cousins, Jane, Liz and Helen!

The reunion was great fun with a dramatic close call for family members being hit by lightning while hiking the local hills. We are so blessed that everyone will be o.k. and survive the next family reunion.

Do you have a friend who “disguised” his or her knowledge but overcame it and became successful later in life? Do you have either an Ahh-mazing “AHA!” Discovery or a story to share?