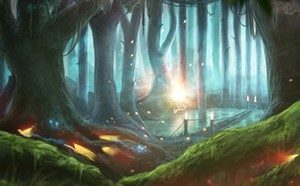 What are Bio-Ghost Gases? During this Halloween season, we may think “ghost gases” are part of a dense fog that rolls across an eerie swamp. The term “Bio-Ghost Gases” are those that are discovered by scientists to be essential for our health.

It is a different paradigm to consider how we rely on gas absorption into our blood plasma for our life force. There are approximately nine different gases including nitrogen, oxygen, hydrogen and carbon dioxide in the air we breathe. Exhaling removes accumulated carbon (or carbon dioxide) from the breakdown of carbohydrates that we consume.  As my husband, Rob, teasingly says … “otherwise we would turn into charcoal briquettes”.

We consume food loaded with nitrates (fruits and veggies) and nitrites (meat). During food digestion, nitric oxide is released into the body by bacteria living in both our saliva and gut. A possible urban myth is high use of anti-bacterial mouth wash kills the benign bacteria needed for the nitric oxide conversion.

Bubbles in the water we drink also deliver essential gases into our blood stream and cells. The DiTetra Gas that is infused into Watt-Ahh delivers oxygen into our blood plasma to support respiration hydration even under extreme elevational conditions.

We also breathe in aerial contaminants or “smog” including NOX (nitric oxide). Before dental procedures, some dentists offer laughing gas (or nitric oxide) as an alternative to Novocaine.

For years, scientists were baffled what was the mechanism that caused the relaxation and dilation of blood vessels including penile erections. Scientists were unsuccessful in isolating the ephemeral gas that seemed to disappear. In the latter 1990’s, scientists were surprised to discover that the so-called “Bio-Ghost Gas” was indeed nitric oxide.

Since this breakthrough discovery, multi-billions of dollars have been spent on both athletic and male performance products containing compounds intended to release nitric oxide into the blood stream (or the nervous system of the erectile tissue of the penis). Nitric oxide, a neurotransmitter, stimulates an enzyme that produces messenger cyclic guanosine monophosphate or cGMP. cGMP causes the arteries in the penis to dilate, so arteries and erectile tissue fill with blood. Exercise releases nitric oxide reserves (muscle activation) to move into the blood stream. The blood vessels dilate to carry more oxygen and nutrients supporting greater muscle growth.

L-Arginine, that oxidizes to nitric oxide, is a typical active ingredient in performance products. The dosage in these products may not be effective when compared to that of an IV application of L-Arginine. However, one concern about higher IV dosages of L-Arginine is some athletes experienced intestinal distress.

In reviewing research literature, there are complex anti-oxidant and enzymatic processes involving the conversion of hydroxyl and nitric oxide free radicals. High levels of sulfur in asparagus neutralize the free radicals to support glutathione synthesis. Glutathione is one of the body’s powerful antioxidants to support the immune function. Another possible urban myth is the odd smell of urine after eating asparagus may be an indicator that the body has low levels of nitric oxide.

The most recent “nitric oxide” discovery is nitroxyl (HNO) that is the current focus of many pharmaceutical groups in researching the potential therapeutic value of HNO against cardiac ailments including congestive cardiac failure. Sulfur (H2S) can reduce oxidized nitric oxide and certain salts contain releasing compounds for HNO.

Our Holistic Tip: There are numerous “healthier” salt products on the market such as Celtic salt, Angeli’s salt, Himalayan pink salt and food-grade Epsom salt which can be lightly added to Watt-Ahh. The combination may support the production of HNO to protect the heart.

How to Measure Nitric Oxide in the Body

Testing for a specific gas in the blood plasma is a challenge. The testing of exhaled breath may provide the most accurate results. Sensors are used in clinical settings that detect volatile organic compounds in exhaled breath. Doctors typically use the results to diagnose any asthma or pulmonary disease in their patients.

A simpler test that may or may not reflect the nitric oxide level in the blood plasma, involves the use of saliva test strips. A health care practitioner reported to us that she and another doctor tested positive for nitric oxide in their saliva (pink color at the end of their respective test strips) while others seating nearby at a medical conference had paler color results. She attributed to her sharing with the doctor, one of her bottles of Watt-Ahh with the addition of a light dose of her special salt combination. The photo below shows my own results, the lighter one during the daytime and the darker one during in the evening on the same day. I only drank Watt-Ahh without any salt added before each saliva test. 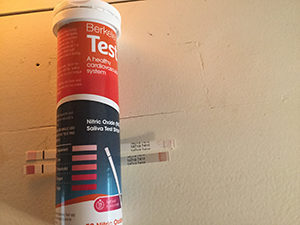 Oxygen, another gas absorbed into the body, is the subject of this year’s medical breakthrough. The Nobel Prize laureates discovered the physiology of cells in sensing low oxygen levels. It can trigger a genetic response to produce erythropoietin (EPO) that controls the production of red blood cells and stimulate formation of new blood vessels. Chronic kidney failure and anemia occur when the body can no longer produce sufficient EPO. Cancer cells, however, will hijack this oxygen response and form blood vessels that support growth of tumors in a low-oxygen condition. Pharmaceutical groups are developing drugs to manipulate oxygen-sensing pathways to combat anemia, cancer, and diseases of the kidneys, heart and lungs.

Our Holistic Tip: Drinking Watt-Ahh (or breathing DiTetra Gas, see below) with its positive ORP (oxidation reduction potential) will deliver oxygen to avoid the cellular response in adapting to a low-oxygen condition that may lead to a chronic disease.

The blood-brain barrier is a nearly impenetrable shield between the blood vessels and brain tissue that prevents the passage of molecules to the brain. It is the barrier for many therapeutic applications intended to target malignant  tumors, repair stem cells or remove plaque accumulations  to protect and restore both memory and cognitive functions. The latter is the one of the central challenges in finding a medical cure for Alzheimer’s Disease.

The Rockefeller Neuroscience Institute of West Virginia University has recently discovered a new technique of using microscopic bubbles to temporarily open the blood-brain barrier. Bubbles placed in a precise spot within the brain are exposed to the frequency of ultrasound  waves. The bubbles start to oscillate to open the passage thereby allowing applications of larger molecules to cross the blood-brain barrier.  An inspiring story of Judi, one of their patients, is provided in this video.

We think DiTetra Gas (Dioxytetrahydride) is another bio-ghost gas that has huge implications in boosting mitochondric energy for healing, recovery, immune support against diseases and oxygen delivery for optimum performance. DiTetra Gas is delivered to the body either by drinking Watt-Ahh Polarized Water or breathing from the gas produced by a WIT Machine. Additional physiology research is needed to fully understand the multiple mechanisms. The following are some of the known and potential benefits from DiTetra Gas:

For more explanation on DiTetra Gas and Watt-Ahh, please visit this link.