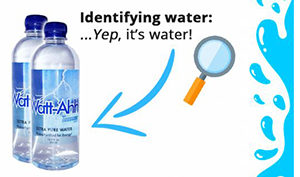 Or is it just water? Not!

DiTetra Gas is a bio-active gas (or bioenergetic gas), we call the Fifth State of Water, that has huge implications in boosting mitochondric energy for healing, recovery, immune support against diseases and oxygen delivery for optimum performance. DiTetra Gas is delivered to the body either by drinking Watt-Ahh Polarized Water or breathing from the gas produced by a WIT Machine.

The three of the states of water are liquid, solid (ice) and steam (or water vapor that condensates back to liquid water). Water also can become gas which is the fourth State of Water.

The discovered Fifth State of Water is a restructured dioxytetrahydride molecule with a reservoir of electrons that forms a stable homogenous gas (Dioxytetrahydride Gas or DiTetra Gas). This Fifth State of Water (two co-valently bonded oxygen and four hydrogen) is the active water gas (or plasma state) with an electrical differential when compared to other states of water.

The production of the DiTetra Gas is created using relatively low energy heat in an electromagnetic process. One of the phenomenal discoveries is that DiTetra Gas-infused Water stabilizes compounds for years including hydrogen peroxide. The utility patent was issued to WIT International by the U.S. Patent and Trademark Office on April 16, 2019.

We like to say Watt-Ahh Polarized Water is similar to that of The Original Water on Earth … a Thunderstorm in a Bottle. It is 100% water with an energetic Natural Intelligence.

Watt-Ahh is ultra pure water  with a patented stable structure. The infusion of DiTetra Gas creates a crystalline-like structure with donor electrons on the outside hydrogen ring. This “polarization” configuration with its electrical differential repels and separates from other water molecules for effective single-cell hydration as well as crossing the brain-blood barrier for better hydration and repolarization of the brain (donor electrons offset oxidative stress). Also, the Polarized Water restores cellular voltage to allow crossing of the cellular membrane including any nutrients (vitamins) being transported by the Water.

Both the positive ORP (oxidation reduction potential) and neutral pH make Watt-Ahh a novel water. The stability of its structure has received a U.S. utility patent.

Watt-Ahh has electrical differential to allow passage across the cellular membrane and brain blood barrier for brain hydration and neuron charge balance.

We think DiTetra Gas (Dioxytetrahydride) is another bio-ghost gas that has huge implications in boosting mitochondric energy for healing, recovery, immune support against diseases and oxygen delivery for optimum performance. DiTetra Gas is delivered to the body either by drinking Watt-Ahh Polarized Water or breathing from the gas produced by a WIT Machine. Additional physiology research is needed to fully understand the multiple mechanisms. The following are some of the known and potential benefits from DiTetra Gas: