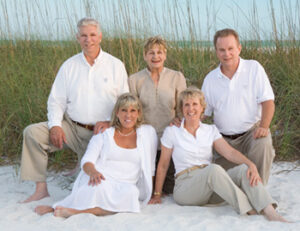 July 23, 2022 — Stories of our ancestry can link us. Ted Suratt, who co-founded AquaNew and WIT with Rob Gourley, was proud of the Suratt name. His relative, Tavern Owner Mary Suratt, was the first woman to be hang for her supposed crime by the U.S. Government. Ted defended her, believing that she was not a co-conspirator in the assassination of President Lincoln.

My relative, James Pumphrey, also thought Mary Suratt was innocent. Her husband, John Suratt, introduced James to John Wilkes Booth. James owned a horse stable near the Ford’s Theater and rented the “get-away” horse to Booth. James was temporarily held in jail as a possible co-conspirator but he was later released. Believing in Mary Suratt’s innocence, he waited mounted on his horse for hours outside the Old Arsenal Penitentiary. He hoped to carry President Andrew Johnson’s reprieve for Mary but none arrived. On July 7, 1865, she was hanged with three of the other conspirators.

Ted and Rob had a business relationship in a special chemical process, invented by Ted, that removed the tarnish that accumulates on combustion engines to improve auto performance and fuel economy. In the early 1990’s, Rob moved from Alaska to Florida to run an “Enginewity” franchise with his partner, Chris Berliner, in Bradenton, FL. Rob did an “Enginewity” process on my Ford Bronco II and “she” never ran so well even when new.

In the mid-2000’s, Rob contacted Ted who was a chemist, to help explain the water gas that Rob discovered. It was interesting the trial-and-error experiments that they performed together. Even when the results were not as they expected, it generated even more discussion and exchange of ideas with more testing on the novel discovered gas which we originally called SG (Suratt-Gourley) Gas or today, DiTetra Gas. Both Ted and Rob became confident about the unique discovery and the machines that Rob built to generate the Gas. The applications for the Gas are endless. They decided to form two businesses together: AquaNew and WIT International in 2007 and 2009, respectively.

In 2007, we were excited about the prospects of the newly-launched Watt-Ahh bottled water into the marketplace and memorialized the original group with a Siesta Beach photo taken above (Ted is shown back row left, Carol, his wife and Rob; Melinda Lagasse (left) and Dana (right) in the front row).

Sadly, Ted passed toward the end of July of 2022.  Carol passed several years ago.