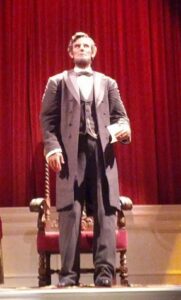 May 5, 2022 – Over ten years ago, Rob and I witnessed a part of Disney’s audio-animatronic history. We held the mechanical hands of the President Abraham Lincoln animatron that appeared in the 1964 World’s Fair. Former Imagineer and yes part of Rob’s “Inventified” Family, was David Schweninger. He was one of the lead creatives and robot engineers (or Imagineers) on the Lincoln project. Dave told us that he hand-machined the mechanical hands.

Dave and his Imagineer team brought to robotic life Walt Disney’s inspired concept. He shared his story about Walt that he was not satisfied with the Lincoln figure who only sat in a chair. Walt demanded that his engineering team figure out in less than a few weeks how to get the animatron to rise up from the chair, stand on his two feet and move his hands as he gave his speech. Their sensational success was ultimately televised … when American families gather around their on black-and-white tv’s and the show opened the bright possibilities of the future for us kids.

In his career as an Imagineer, Dave created animatronics for other world-famous theme park attractions including the merry ghosts in the Haunted House. In 1984, Dave started a new company with Bob Gurr and they developed the 30-foot tall King Kong Encounter animatronic. Sadly, we lost Dave last month.

I tell this story in Dave’s memory because there is a connection to the bioelectronics of our own bodies. How the heart needs electron energy for the its vortices to circulate blood and for muscles to contract. Rob and I talk about this every day as we tell others about the electron-enriched Watt-Ahh polarized water needed to support our own human energy.

More History of Robotic Animation and the Evolution of Cardiac Pacemakers

In a recent conversation, one of our learned tech. friends, Morgan (he is also one of Rob’s “Inventified” friends), opened my eyes on the historic significance of humanoid robots in demonstrating the importance of electrons in our own lives. We talked about the story of  Frankenstein and how author Mary Shelley was inspired by the principles of galvanism in the early 1800’s. Famous authors at the time including Mary were fascinated by the possibility that scientists could use electricity to either stimulate or restart life. Italian physician, Luigi Galvani, and his wife, Lucia, became the pioneers of bioelectromagnetics when they discovered in 1780 that an electrical spark applied to the muscles of a dead frog made its legs twitched. Later, they discovered an electrical charge to a dead frog’s heart caused myocardial contraction, which is the beginning of the pacemaker history.

However, it took many stories of successful resuscitation of cardiac arrest patients over the next 200 years to finally have a published design of a pulse generator for use on animals for cardiac stimulation. Many scientists and engineers were subsequently involved in the design of today’s cardiac pacemakers.