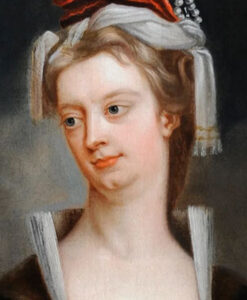 September 17, 2021 — One brave English aristocrat and prolific author, Lady Mary Wortley Montagu, defended the injection of a small dosage of a disease to trigger the human body’s antibody immunity defense. Soon after her marriage, Lady Mary lost her only brother to the same disease while she survived against her doctor’s expectations.

Once recovered, she moved to Turkey when her husband was appointed the UK Ambassador. She discovered inoculation against the disease was widespread in the Ottoman Empire and even had her children inoculated.

When Lady Mary returned home in the UK, the year was 1721 and the disease was smallpox. There was a global epidemic killing people in both Europe and what later would become the United States. Lady Mary collaborated with Emanuel Timoni and James Pylarini who pioneered a live smallpox virus inoculation. The virus came from liquid extracted from smallpox blisters in mild cases of the disease. The treatment pre-dates Edward Jenner’s first smallpox vaccination by over 70 years.

Based on her own experience, Lady Mary used her literary talent to publicize the benefits of inoculation. It stirred bitter hostility, including physical violence. Quoting from the National Trust article … “Opponents of the procedure derided it as oriental, irreligious, and a fad of ignorant women, so Lady Mary’s fame for it was both mixed and short-lived”. This story makes one wonder about today’s adverse and dismissive reactions toward both novel treatments and those individuals involved with the treatments during the current pandemic.

Based on the historic timeline of antibody science, Georges Köhler and César Milstein invented monoclonal antibodies in 1975. Previous scientists discovered the natural immunity function of plasma B cells. B cells make a specific antibody molecule before it encounters the virus by targeting the spike protein on the outer shell of a virus. This interferes with the virus’ ability to attach and gain entry into human cells.

Monoclonal antibodies are mass-produced in a laboratory and are designed to recognize the spike protein of a specific virus. This treatment gives the body a “head-start” in mounting its own immunity response.

All of the 2021 Pow-Ahh Immunity Series can be found here.